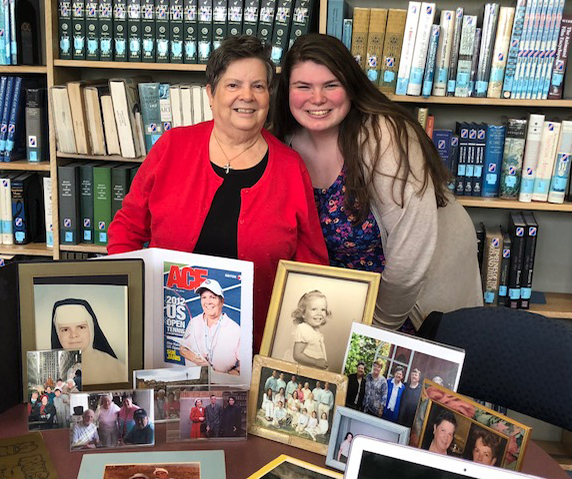 Caldwell, N.J., May 8, 2018 – Lynve Laurard did not have religious sisters in school growing up, but her parents were educated in Catholic schools and she always had an interest in oral history. From the time she was in grammar school and heard the oral histories of slaves during a visit to the Library of Congress, Laurard knew that type of communication was something unique. “When I heard that the university was offering the SisterStory oral history project, I said, ‘I have to be a participant.’”

Laurard and five other students engaged in the semester-long project after being paired with a Dominican sister and getting to know her throughout the semester. They unveiled their final projects at a reception May 7 on campus. The SisterStory Project is a national project that archives histories of women religious and connect sisters with young women who share their impressions in an authentic, first-person 20-something voice.

Laurard was paired with Sister Alice Uhl, O.P.  For Sister Alice, the project was a great way to get to know the college-age students and to have the rare opportunity to reflect on her life as Laurard asked the interview questions. “She’s such a good listener,” said Sister Alice.

The students recounted the happy adventures they had with the sisters over the semester including sharing meals at places like the local pancake house or celebrating National Catholic Sisters Week by having dinner at the Sacred Heart Convent, across from the university’s campus.

Jacqueline Marcinczyk, a junior with a double major in business administration and criminal justice, worked with Sister Elaine Keenan, O.P. “I am blessed to have been able to get to know Sister Elaine very well through the process and to be able to call her a friend.”

Sister Pat Worman, O.P., saw the project as a gift enabling her to name her life in a new way and allowing it to be shared. She was teamed with Erika Christian, a junior psychology and education major. “I’ve always been happy as a sister,” said Sister Pat.  She hoped Erika and all the students could also come to see their lives as journeys—to be able “to dream, grow, embrace the unexpected and accept what happens in life. That allows us to be compassionate because of our own experiences.”

Kelsey Marren, a junior psychology and education major, and Sister Suzie Janis were teamed up. “I never had the connection with the Dominican sisters on campus. I love it,” said Marren. “Kelsey was very conscientious” about her work, said Sister Susie. “It was a mutually good experience.”

The students produced videos and other visuals and created poster boards on the sisters.

Dr. Marie Mullaney, professor of history, was a faculty advisor for SisterStory.   The goal of celebrating the work of the Sisters of St. Dominic, she said, was highlighted this past weekend with the passing of the former president of Caldwell, Sister Vivien Jennings, “a master builder.” Mullaney said she was most grateful that Sister Vivien had been a part of the first Sister Story cohort in 2016 and noted the poster board on display of Sister Vivien’s oral history created by a student two years ago.  Communication and Media Studies Professor Rachel Carey and Campus Ministry staff member Abigail Cimorelli were also advisors.

The other students involved in the project were Roksana Korbi, a sophomore biology major, and Anwar Khalil, a sophomore, health science major. The other sisters involved were Sister Lena Picillo and Sister Eleanor Uhl.

SisterStory is the ongoing project of National Catholic Sisters Week, a campaign aimed at broadening awareness of Catholic sisters. The intention is to demystify religious life—the vows of poverty, celibacy and obedience, the experience of living in community, the desire to belong totally to God—by sharing the stories of Catholic sisters.

Many of the SisterStory blog posts from the semester can be accessed on www.sisterstory.org.