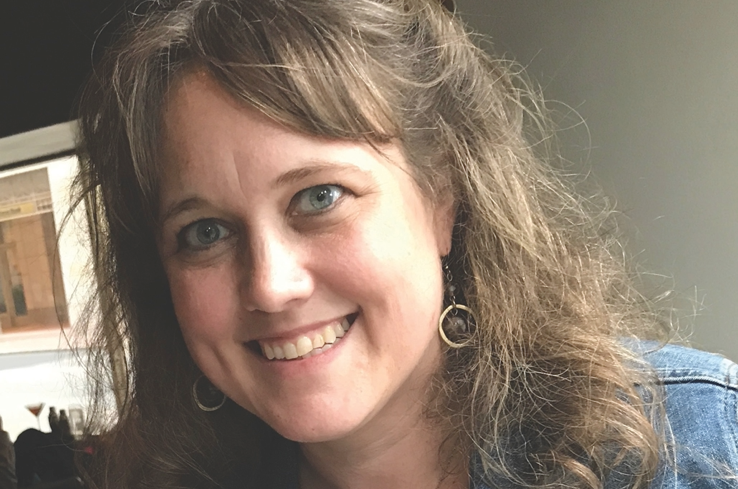 “They acquire a knowledge of history and start viewing the world from multiple perspectives,” says Kornacki, chair of Caldwell University’s English Department. She finds it most fulfilling when through reading prose, fiction, creative nonfiction, drama or poetry her students start to think “about themselves, or their place in the world or the relationships with other people.” That is more rewarding than “getting the quote-unquote perfect paper,” says Kornacki, who is also an associate professor in the department.

Championing English literature might seem like a futile exercise at a time when some lament that young people are not reading books. But Kornacki doesn’t buy that as a challenge; she works with it. “This notion that ‘nowadays’ people aren’t reading, aren’t writing—if you read back through time, you could find people saying that in the 1860s, the 1920s,” she says. The nature of people’s reading and writing has changed. “They are writing more than ever. It is different writing,” says Kornacki, pointing to the explosion of digital and social media sites and of commentary and blog posts. In her classroom she builds on that and challenges students to go places they might not have gone before. For many that means reading longer-form books.

“You learn so much about how to write, not just from practicing writing but from reading; you are not realizing it, but you are.” Plus reading English literature offers life lessons—like learning through characters how to be compassionate. “We can’t empathize with someone else unless we can put ourselves in their shoes,” says Kornacki.

Born and raised in New England, she knows what it is like to find a character or writer from 200 years ago who inspires a student. During her studies Kornacki kept hearing the name of another New England woman—Margaret Fuller, a 19th-century writer and advocate for the American transcendentalism movement. Fascinated by Fuller, she began to study her works and did her thesis on “Margaret Fuller’s Conversations: Self and Other in Nineteenth-Century Literary and Intellectual Culture.” Today Kornacki is on the board of the Margaret Fuller Society and is the co-editor of the organization’s newsletter, Conversations, which she founded.

Kornacki’s passion for history is incorporated in her classes. “We don’t have a good connection with the past … it is impossible to understand where we’re at today without understanding history, and part of that comes through literature,” she says.

Kornacki also believes in providing students with experiential learning excursions. In her Literature in the Environment class, they go to the great outdoors and observe. In African American Literature, American Images and Literature and Women in Literature, they “appreciate literature as a tool for social justice”; her students read texts that include the history of slavery and race in America juxtaposed with contemporary works and current issues. She has taken students to the Schomburg Center for Research and Black Culture and on a walking tour of Harlem. When she directed the honors program she hosted trips to the United Nations and to Boston for the sightseeing Duck Tour and part of the Freedom Trail of national historical sites.

From a young age growing up in Groton, Massachusetts, Kornacki and her brother Steve Kornacki, a television political journalist, were encouraged by their father and mother to read. “My mother would take us to get our library cards. We did the summer reading program … our parents were big believers in the educational family vacation.”

Kornacki attended high school in New Hampshire, earned a bachelor’s degree in English literature from the University of Maine, did a semester in law school and then went for a master’s in teaching from the University of Maine. She taught English for three years at Oakhill High School in Maine, which serves the towns of Litchfield, Sabbatus and Wales, and then earned a master’s degree in American and New England studies from the University of Southern Maine. “I’ve always had an interest in place. For me that place is New England.” Kornacki did her doctoral work at the University of Connecticut where she was “lucky enough” to be in the classroom the entire time. “I taught through graduate school.” While pursuing her doctorate, she worked at the Harriett Beecher Stowe Center as a tour guide and helped facilitate programming and a conversation series, “Salons at Stowe,” on topics related to contemporary social justice and the history of slavery.

Once she earned her Ph.D., Kornacki sought to find a liberal arts school, a smaller institution; the large university had provided solid teaching training, but something was lost in that bigness: “You would not see a single familiar face walking across campus.” When Caldwell University came up, she was attracted to its size and diversity.

Kornacki is grateful for her “amazing” colleagues in the English Department and their creativity in developing new classes for English majors and non-majors where students can engage in high-impact learning and make meaningful connections to the contemporary world outside the classroom.

Choosing English as a major “is a dangerous thing,” she says. “Parents and kids want to know ‘what kind of job I’m going to get,’ and this discipline is not ‘career-specific.’” Yet “the sky is the limit,” she says, pointing out that law schools are attracted to English majors because of their humanities studies. Attorneys need to develop skills like “paying close attention to text” and doing “close reading,” which involves thoughtful, critical analysis of a text and rereading. Large corporations desire English majors because they recognize that good writing and critical thinking are missing in their employee base. Other English majors pursue publishing and writing careers; some double major and go into teaching. Kornacki says an increasing number of students with English degrees are pursuing careers in the medical humanities, inspired by “literature that deals with doctor-patient issues.” For non-majors, English classes provide a chance to develop the skills of critical thinking, reading, and writing that can help students to be “successful anywhere,” says Kornacki.

In five years at Caldwell, she has directed the honors program, served on the Academic Leadership and Curriculum committees and helped with the Restart Task Force following the lockdown. She is currently serving on the task force for redesigning the core curriculum.

The pandemic has been a learning process for Kornacki and her department colleagues as they have endeavored to be innovative in teaching. They have found that the most effective methods involve a balance between synchronous—in real time whether in person or with technology—and nonsynchronous learning, with students navigating some of the coursework on their own. Most important to her and her colleagues is “reaching out to students and recognizing that we are in a pandemic and students are overwhelmed too … they’ve appreciated that. They’ve seen that.”

As much as COVID-19 has forced an adaptation of the teaching and learning process, certain aspects must remain in a good English literature class, like the lessons to be learned from history, the empathy to be gained from the characters, the critical thinking skills and the search for truth. Kornacki knows good things are happening when students are taking intellectual risks and asking interesting questions—whether in the classroom or in a lively chat on Google Meet. She wants them to be free to discover through the literature and gets excited when they “connect meaningfully with at least one of the texts that we read: making connections between their own lives, thoughts, and emotion and those of published authors.” And she knows that sometimes that means they may be lucky enough to find a writer from 200 years ago who inspires them to discover their own research and writing passions. Yes, she says, “there are always reasons why we end up where we end up.”  n