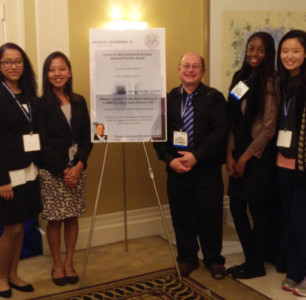 Caldwell, N.J., Feb. 2, 2016 – Science faculty and students had the thrill of meeting Nobel Laureate Kurt Wüthrich at the Eastern Analytical Symposium in November.

Biology Professor Agnes Berki and Chemistry and Physics Professor Fernando Commodari, along with nine students in biology and chemistry, attended the conference held in Somerset, New Jersey. They presented their peer-reviewed work, “Antibiotic Effects of Essential Oils: Clove and Oregano Oils, on Cariogenic Bacteria as Studied by Microbiological and NMR Techniques,” as poster 199 in the Bioanalysis II session on Nov. 17. Marli Pimenta, who received her bachelor’s degree in biology in 2015, presented the original research findings showing that oregano-essential oil and clove-essential oil inhibit cariogenic bacteria more selectively than good bacteria.

Several students attended a plenary lecture on Nov. 16 on “NMR: From Man to Molecules,” given by Nobel Laureate Kurt Wüthrich. Berki said Wüthrich recounted how original ideas in science don’t immediately have obvious applications that directly impact humanity. “There have been several Nobel prizes awarded in the area of developing nuclear magnetic resonance methodology long before the now-familiar MRI images that we all recognize in clinical diagnostic and research medicine/science.”

After the talk, some of the students were introduced to Wüthrich by Commodari, who almost 25 years ago was invited to do his postdoctoral studies using nuclear magnetic resonance at ETH in the Wüthrich lab. “I was delighted to introduce our students to a guru of mine, Professor Wüthrich, who spoke with them about graduate research now underway in his group at Scripps, La Jolla, California,” said Commodari.

Junior Tulaja Shrestha, who is majoring in biology and chemistry, said she appreciated the opportunity to meet “such a humble genius.” It was “especially great to be able to pick a Nobel laureate’s brain and learn more about his contribution to chemistry.” Wüthrich received the Nobel prize in chemistry in 2002.