Bob Mann: A Professor and a Broadcaster 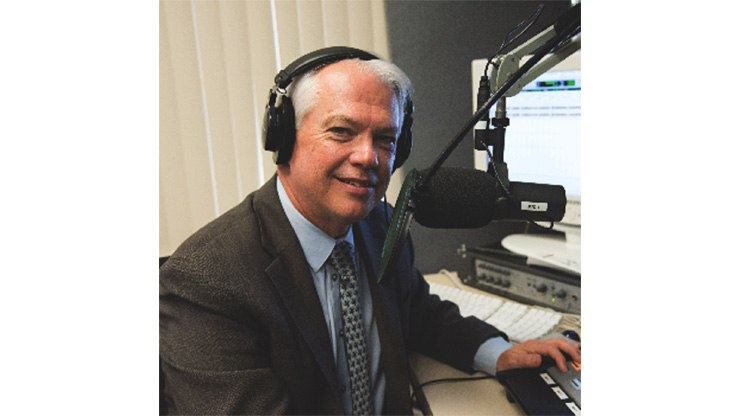 From the time Bob Mann was six years old, he wanted to perform. He set up a turntable and a fake microphone in his bedroom. “I used to pretend to be a WMCA Good Guy,” he says, referring to the nickname of the on-air personalities on the Top 40 music station in the 1960s. He played three records over and over again—Ray Charles’ “Georgia,” Brenda Lee’s “I’m Sorry” and Ferrante and Teicher’s “Exodus.” “My poor parents … if my father called from work, he had to be put on the phone to ask for a song,” Mann explains. From there “it evolved to me wanting to be the play-by-play announcer for the Yankees and take over for Johnny Carson.”

He chose a high school that had a television studio and a “full-blown television closed-circuit system,” the Jesuit-run Brooklyn Preparatory School. “By sophomore year I was the host of the morning show,” Mann says. At Brooklyn Prep he learned to think critically and to see different points of view; the experience was “eye-opening, thought-provoking.” After high school he attended Fordham University and was active at the radio station, WFUV, quickly learning that one certain way to be on the air was to get into the news business.

Fast-forward several decades and Mann has a number of experiences to share with his students as a successful on-air broadcaster and university professor. “One informs the other. I came to this revelation during my first sabbatical, that I could never be one or the other. I don’t think I would be as good a professor without still being a broadcaster, and I don’t think I’d be as good a broadcaster without still being a professor,” he says. Today Mann hosts a national media issues program, “Let’s Consider the Source,” on Sirius XM Satellite Radio. It is produced by the Communication and Media Studies Department. He also hosts the public affairs shows “Humanities Connection,” for the New Jersey Council of Humanities, and “Of Mutual Concern,” which air on WFDU In 2015. Mann received a first-place award from the Garden State Journalists Association for one of his “Of Mutual Concern” shows, and Mann and the production team of “Let’s Consider the Source” also received a GSJA award.

Working as on-air talent and producer has enabled him to keep abreast of the changing media landscape and to bring insight to his students. Mann is aware of the sacrifices it takes to begin a media career in the New York market because as a young professional starting out, he traveled that road himself.

After graduating from Fordham with degrees in communications and political science, Mann accepted a job at a smaller station to begin his career, a route often taken by aspiring broadcasters who choose to stay in the New York tristate area, the country’s largest media market. At WOBM in Toms River, he was a newscaster and a sportscaster. “I learned to work at WOBM,” gathering and writing news and doing a news broadcast every hour on the hour. After that he went to work at UA Columbia, a well-known cable company in that era. “They gave me the opportunity to be a talk-show host in every format possible—news, entertainment and sports.” From there, he got some big breaks, landing a gig as host of the pledge drive for PBS-TV’s Channel 13 and becoming an on-air feature reporter and executive producer at WOR-AM Radio.

Around that time Mann started to do something different—teach, at Fairleigh Dickinson University and Caldwell College. “I adapted to it quickly and liked it very much right away. You are speaking; you are performing.” In fact, “everything you had ever learned had a purpose, and you could be funny and serious, and there was a wide variety of some nice students,” he says. He was hired full-time by Caldwell President Sister Vivien Jennings, O.P., and Academic Dean Sister Patrice Werner, O.P., to build the Communication Arts Department at a time when the college was looking for a communications professional to teach.

He also created his own company, Mann Media, and hosted radio and cable programs for Hackensack University Medical Center. The popular TV show would stay on the air for 15 years, raising awareness of health issues. “I played surrogate for anyone in the audience who had just heard he or she had the diagnosis. It also made me a total hypochondriac because I was convinced I had every single condition that was ever mentioned on that television or radio program,” he says, chuckling.

Mann has been president of the Caldwell faculty council for six terms. “I think one of the great strengths of higher education is shared governance—that faculty is a key player in the decision-making.” He is grateful to his friends among the faculty who have helped him. “You can’t talk about it without mentioning the people.” In 2014, he was the recipient of the Caldwell Cup, which annually recognizes an employee who has made a unique contribution to the campus going above and beyond the job description.

But life is not just work, he says. “Any professional needs to be happy with his or her personal relationships. My relationship with my son Chris and getting married this summer to Cathy are important—to not define myself by my career.” He lights up when he talks about Chris, a graduate of Fordham, who is an improvisation actor working in post-production in New York City. He is thrilled for Cathy, a kindergarten teacher and an adjunct professor (known to students as Professor Lundquist) in education at Caldwell, on recently earning her Ph.D. in language and literacy, also from Fordham.

Mann has been a die-hard Yankees fan since he was a child. “I’m insane about baseball. I’ve wasted tons of money on Yankee season tickets.” But he grew up in Brooklyn, certainly not a place where Yankees fans are born and bred. “Why am I a Yankees fan?” It all goes back to television. “I’d come home and if my favorite cartoons were not on WPIX, I’d watch the Yankees and say, ‘Oh, I see why my mother likes this game.’” In 2012 his passion took him to Tampa to play in the Yankees Fantasy Camp. His manager was a former first baseman and outfielder Joe Pepitone. “We played against a team of former Yankees. I am so glad I did it.”

Mann is chair of the newly named Department of Communication and Media Studies, and he and his colleagues have goals for expansion. He is proud that the department can boast of graduates who have received Emmys including Justin Cece ’99, a producer/editor at NBC News, who donated his Emmy to the university last year as a symbol of gratitude to the department for the foundation he received as a student. Mann wants to see more students “breakthrough” in the media. But beyond that, the knowledge and skills students receive in the communications courses provide a solid foundation for numerous professions. “When you see surveys of employers and what they are looking for, it is speaking, writing, and general communication skills,” says Mann.

The department recently added a full-time faculty member, put in a new radio console, and is adding podcasting to the radio broadcasting course. It is all about moving forward. “There’s still a lot left to do. I have to be pedaling as fast as I can.”