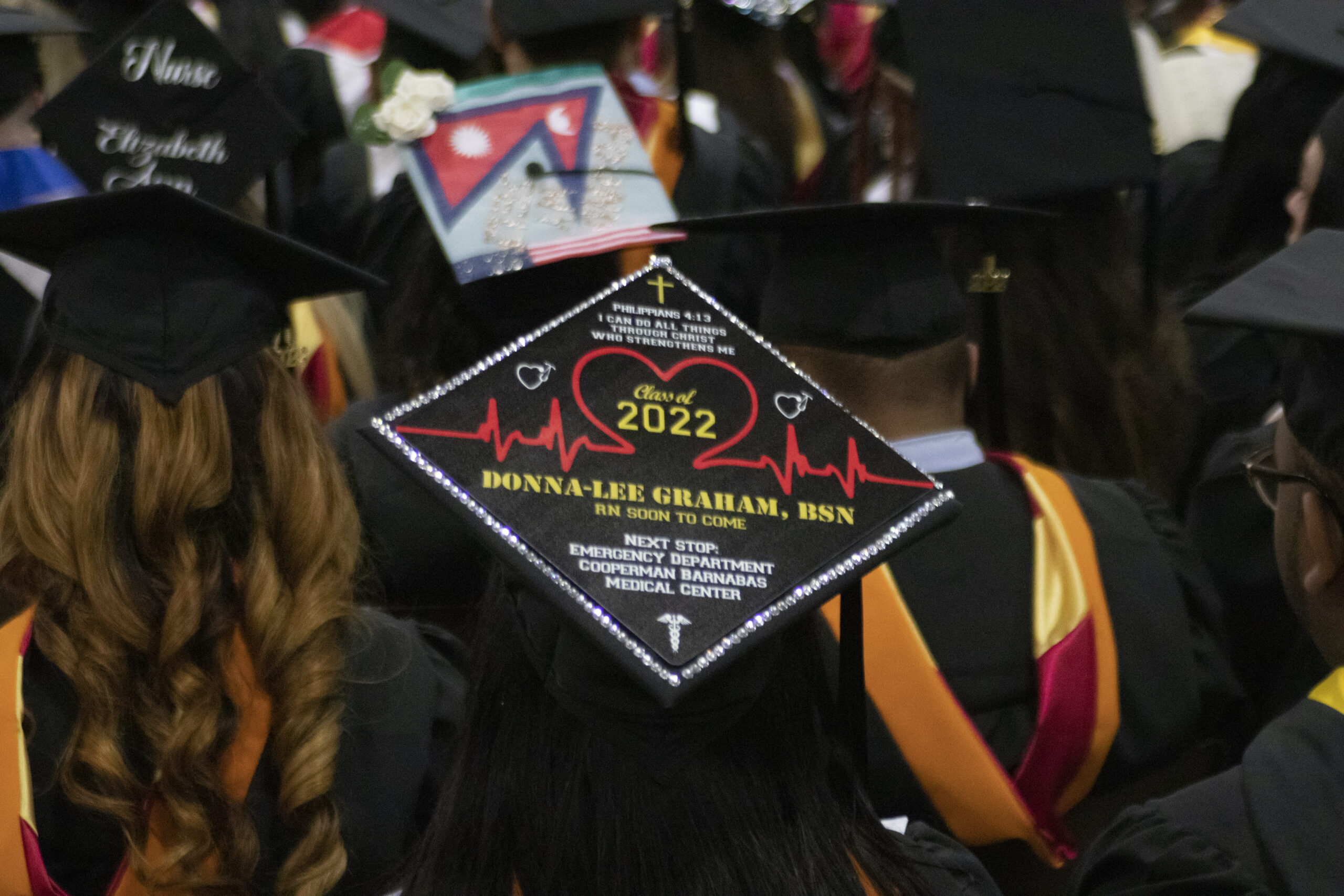 President Matthew Whelan, Ed.D, commended the graduates for being “the best example of perseverance and resilience.” He reminded them that “no one does it alone” and asked them to  show appreciation by standing up and giving a round of applause to those who helped them earn their degrees.

Noting that the last few years have been very challenging, Dr. Whelan said, “Somewhere along the way you made the decision to keep on going and not give up.” He charged the graduates to “expect the unexpected and deal with it”  and never to give up in the face of conflict or difficulties.

“God has a plan. You have a plan and together you will figure out that plan.”

“Get good at making mistakes” and learn from them, said Dr. Whelan. He encouraged them to remember that things don’t always have to be done the same way and to be kind to themselves, their neighbors, their family members and those who disagree with them. “Be kind and you will change the world for the better.”

Yaman Thapa, the student speaker for the undergraduate commencement ceremony, spoke about the journey of discovery Caldwell graduates have made during their university careers and how they faced obstacles with resilience and compassion. “These obstacles allowed us to advance in growth. Growth happens when we explore outside our comfort zones,” said Thapa, a native of Nepal who received a chemistry degree with a minor in neuroscience. She spoke of one of her favorite books, “The Little Prince,” which features a geographer who sits on his planet, designs maps, “only studies and doesn’t wander” and relies on information other people give him. “What I realized is that we were not like that geographer … we are explorers, going beyond our studies, to use our knowledge and discover the best versions of ourselves.

“We have transformed our hardships into wisdom, and we will carry Caldwell University’s core values forward in our pursuit of truth,” said Thapa, who has been accepted by Cold Spring Harbor Laboratory in Cold Spring, New York, to pursue her Ph.D.

The graduate ceremony speaker was Patricia Valerio, who received an MBA. She shared one of her favorite quotes from Charles Darwin’s “The Origin of Species”: “It is not the strongest of the species that survives, nor the most intelligent. It is the one most adaptable to change.” Valerio pointed out that the words were not Darwin’s but those of business professor Leon Megginson, who interpreted Darwin’s writings. Both men, said Valerio, “understood that the concept, and the need to adapt to change, transcended their respective fields.”

“I think one of the most powerful qualities about the Caldwell University Class of 2022 graduates is that this is a group that is not only not apprehensive of change but also one that has made efforts to welcome those challenges into our lives.”

Valerio told members of the class that as they go forward and “are faced with various forms of changes and challenges” to recognize and focus on the positives “that change can usher in” and to be gratified by what they have already accomplished. A resident of Lincroft, New Jersey, Valerio is an assistant manager for Medforce where she does event planning for pharmaceutical companies.

The University presented an honorary degree to Louis LaSalle, a longtime executive in New Jersey’s health care industry. He recently retired as senior vice president for corporate external affairs at Barnabas Health. LaSalle is a seasoned professional in community, public and governmental affairs in the healthcare field, having spent 31 years at RWJ Barnabas Health and St. Barnabas Medical Center. A resident of Roseland, New Jersey, LaSalle has been active in community service on a number of New Jersey boards and committees including as president of the Essex County Parks Foundation, a member of the Caldwell University President’s Advisory Council and chairman of the Roseland Planning Board.

LaSalle thanked RWJ Barnabas Health for “allowing me to get where I am today.” He recalled how he had grown up poor in East Orange, one of four children, the son of Italian immigrants. His father died young. His mother, despite the family’s struggles, always stressed the importance of work, education, faith and caring for the less fortunate. LaSalle  told the graduates to remember those who are in need, to listen a lot, and upon initially meeting someone to remember that person’s name by repeating it three times in a conversation.  And he said it is important to live out the message in that morning’s Gospel reading. “Love is what it’s all about.”

Linda Luciano, Ed.D., MBA, chair of the University’s board of trustees and an alumna, urged  the graduates to be open to all opportunities that cross their path and to enjoy the journey. “I never understood what it meant to enjoy the journey. I was always in a hurry to get to my destination. But if you slow down for a moment and savor your accomplishments, learn from your failures, and embrace the people who offer a helping hand, life will be wonderful.”