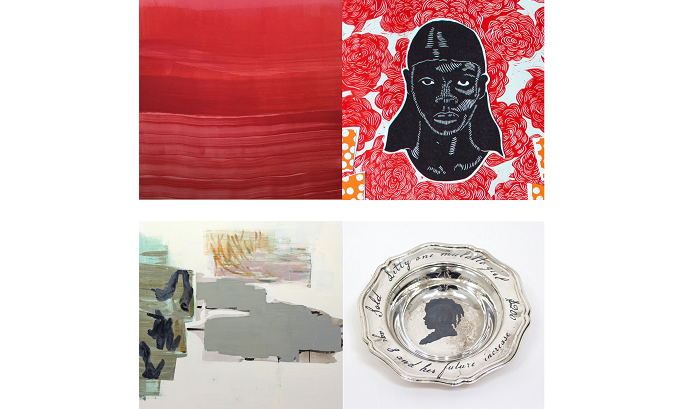 The Mueller Gallery at Caldwell University will present the exhibition “Double Consciousness: Deborah Dancy and Karen Revis” Sept. 14 to Oct. 16.  An artist’s talk will be held Sept. 14 from 5 to 6 p.m. followed by an opening reception from 6 to 7:30 p.m.

Caldwell University Mueller Gallery director Suzanne Baron says, “Double-consciousness is a concept in social philosophy referring, originally, to a source of inward ‘twoness’ putatively experienced by African-Americans because of their racialized oppression and devaluation in a white-dominated society. In the book ‘1971: A Year in the Life of Color,’ Darby English writes about the 1972 exhibition ‘Contemporary Black Artists in America’ at the Whitney, saying that the exhibition featured ‘modernism as a language of equality—a way partly to get the conversation back to the subject of art but also to make the point that painting itself cannot practice discrimination.’”  However, English goes on to state that “The Whitney’s exhibition should have sparked debate about what successful activism would mean. Instead it prompted vigorous invective against both abstraction and the larger issue of robust interracial sociality which the au courant language of Black Power vigorously opposed but Contemporary Black Artists in America exemplified.” (English, Dec 20, 2016)

In explaining the exhibition, Baron continues, “Abstract painter Agnes Martin famously relinquished pressure to centralize both her gender and sexuality in her work. She shared her wishes to remove the inherent ‘qualifiers’ expected of minorities when conveying their vision, with the quote, ‘I’m not a woman, I’m a doorknob leading to a quiet existence.’ A doorknob represents her hope for anonymity regarding external perceptions of her being. The presumption of representing an entire demographic while adhering to the constrictions of each qualifier influences the identity of each artist, ultimately resulting in this feeling of ‘twoness.’”

Baron says that for both Deborah Dancy and Karen Revis—two self-identifying contemporary African American women artists—the solution to this question of subject matter reveals itself through this idea of Double Consciousness. Baron says both Dancy and Revis question the narrative of one singular reified self and allow multiple parts of their identity to coexist within their artistic practices.  “As if addressing this idea of Double Consciousness, of twoness, directly through their artistic practice, both Dancy and Revis produce work that on one hand has roots firmly in modernist abstraction and nonobjective art and the other in political art that addresses their given identity as African-American women.”

“It is a peculiar sensation, this double-consciousness, this sense of always looking at one’s self through the eyes of others, of measuring one’s soul by the tape of a world that looks on in amused contempt and pity … two thoughts, two unreconciled strivings; two warring ideals in one dark body, whose dogged strength alone keeps it from being torn asunder.”

MORE ON THE ARTISTS

Deborah Dancy is an abstract artist whose paintings, drawings, digital photography and small sculptures examine the shifting intersection between abstraction and representation.  She is the recipient of the John Simon Guggenheim Fellowship, a Yaddo Fellow, the American Antiquarian Society William Randolph Hearst Artist and Writers Creative Arts Fellowship and the National Endowment of the Arts NEFA award. Her work is in numerous collections including the Museum of Fine Arts, Houston; the Kemper Museum of Contemporary Art, Kansas City, Missouri; 21C Museum, the Museum of Fine Arts, Boston; the Birmingham Museum of Art; the Hunter Museum; the Detroit Institute of Art; the Boston Museum of Fine Arts; the Montgomery Museum of Art; the Spencer Museum of Art; Vanderbilt University; Grinnell College; the Oberlin College Museum of Art; the Davidson Art Center; Wesleyan University; the SACI Gallery, Florence, Italy, the Bellagio Hotel and the United States Embassy in Cameroon. She is represented by Markel Fine Arts, New York City; N’Namdi Contemporary, Miami; Robischon Gallery, Denver, and Marcia Wood Gallery, Atlanta.

Karen J. Revis is an artist based in New York City.  She is a printmaker driven by process and materials and uses a variety of techniques including monotypes, lithographs, etchings, linoleum cuts, collagraphs and papermaking.  Her KAREN J REVIS Studio portfolio comprises abstract works, vibrant with color and texture.  In 2017, Revis started REVISionary Prints to explore her experience growing up in an all-black community in the ’60s and being black and existing in today’s political climate.

Revis was selected by Colossal Media to collaborate on two murals as the first in their Represent: Black Arts project, with murals in New York City and Los Angeles.  In 2018, she was accepted into the Robert Blackburn Workshop SIP Fellowship Program, and there she gained a wider knowledge and love of printmaking. She learned all that she knows about paper though a residency at the Morgan Paper Conservatory, Cleveland, Ohio; Pyramid Atlantic, Silver Spring, Maryland; the Women’s Studio Workshop, Rosendale, New York, and various workshops at Dieu Donne Paper in Brooklyn, New York.  She has also worked with and learned from masters of their craft: master printmakers Sheila Marbain and Kathy Caraccio, and Jonathan Wise of Mid-Mark Studio.

Revis attended residencies at BACAS, Teggiano, Italy, and Henry Street Settlement, New York City.  Her work is featured in “The Art of Encaustic Painting: Contemporary Expression in the Ancient Medium” by Joanne Mattera (Watson-Guptill Publications).  Revis holds a BFA from Pratt Institute in Brooklyn, New York.  She serves on the board of the Women’s Studio Workshop and spends most days in her studio in Harlem.