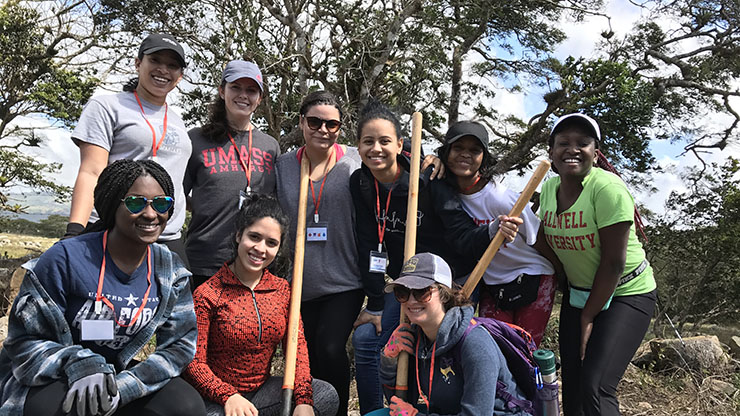 Caldwell, N.J., Feb. 3, 2017 – Caldwell nursing student Channel Jorge cried tears of joy when she saw the happiness of a woman in Nicaragua who received the eyeglasses she desperately needed. Jorge was on a Global Brigades medical mission with Caldwell nursing and health science students for a week in January. They served in a mountainous area near Esteli about 150 miles north of Managua.

Four hundred people waited in line as the college students did vision tests with an autorefractor and helped children and adults pick out eyeglasses and cases.

The students volunteered in units including public health, water, medical and dental. In medical, they triaged patients, took their vital signs and passed them on to doctors. “The doctors were very interactive with us,” said Pamela Marte, a Caldwell health sciences student. In the water unit they dug trenches since there is no running water and the river is a two-hour walk away. “The people in the community came and worked with us. They were very grateful,” said Jorge.

The students also dispensed medicine in the pharmacy and provided health education including giving children information on basic hygiene such as the importance of brushing their teeth and washing their hands. They distributed needed items like shampoo and conditioner, combs and mouthwash.

Global Brigades is an international nonprofit that empowers communities to meet their health and economic goals through university volunteers and local teams.  Students have the chance to shadow local and foreign health care professionals.

Caldwell’s  team worked alongside students from Kutztown University, and during the week, the group saw 1,000 people. The students were moved by the gratitude of the people in the community. “It was so humbling; we take so much for granted,” said Jorge.

The other Caldwell students on the mission were Briana Hientjes, Erin Casner, Kelly Mondey, Lovena Frazil and Jade Kellenberger.

Throughout the academic year the students fundraised to finance the trip and to help pay for the medicines Global Brigades provides, said Marte, president of Caldwell’s Global Brigades club.

The mission confirmed Marte and Jorge’s desire to pursue careers in the medical field. They were happy to see the strong foundation their courses had given them. “I was able to apply my knowledge in medicine and diseases with confidence,” said Jorge.