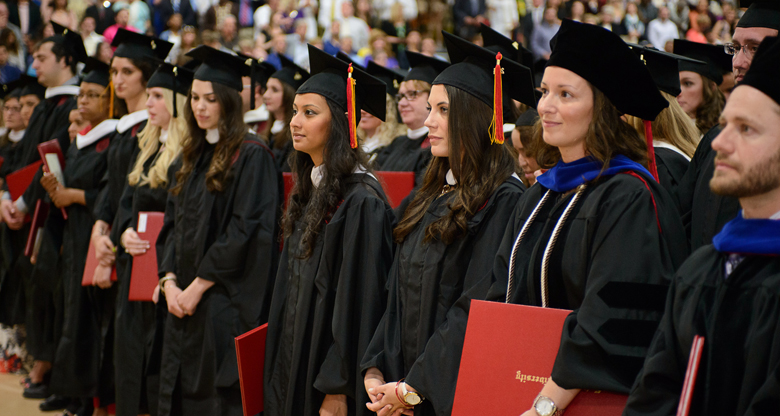 President Nancy Blattner, PhD said the day is one of “great joy and pride for the faculty, staff and administration of Caldwell as we send forth our 72nd class of graduates to make a positive impact on our world.”

“As you complete your studies at our fine Catholic and Dominican liberal arts institution, I encourage you to stay connected to your Alma mater. Return often to this place that has been your home for the past years and carry with you our core values of respect, integrity, community and excellence,” said Blattner.

The college presented an honorary degree to Walter Dean Myers, a critically acclaimed author of literature for young people. Myers is the New York Times best-selling author of “Monster,” the winner of the first Michael L. Printz Award, the 2012-13 National Ambassador for Young People’s Literature, and the inaugural New York City Literary Honoree. He has more than 110 books to his credit, has received almost every major award in the field of children’s literature and is considered one of the preeminent writers for young people.

Myers said that all he has ever wanted to do is write. He said he has kept what he loves close to his heart and existence and he told the graduates that they should do the same in their lives. “Find what you like to do and do it. It doesn’t have to be full time. Keep the people you love close to you and don’t let them get away.” He encouraged them to love themselves, to love their parents and to not be too busy to make room in their hearts for those who mean the most to them. “Life is nothing more than that. Loving yourself and loving the world around you.”

Steven Gallagher, who was receiving his master’s in education administration, represented graduate students, delivering one of the commencement speeches. Gallagher, who was a police officer in North Caldwell for over 26 years before becoming an educator, asked the graduates to reflect on the college’s core values of respect, integrity, community and excellence. Saying he had “great respect for the badge” he wore as a police officer, Gallagher encouraged the students to consider what Caldwell had given them “a badge of integrity…this badge provides us with support to make choices. At times these choices will be uncomfortable. Make the right choice,” he said.

David Reeth, of Highland Lakes, New Jersey, gave the undergraduate commencement remarks. He told his fellow graduates, “Whatever our major may have been, now our major is life,” and “we must pursue opportunity with vigor: without fear, without uncertainty, without doubt.”

Reeth received his bachelor’s degree in business administration and has been president of Caldwell’s Student Government Association for the past two years. He has received a number of honors including the 2014 Caldwell Trustee Recognition Award from the Caldwell University Board of Trustees, the campus Excellence in Leadership Award and the 2012 New Jersey Collegiate Entrepreneur of the Year award.

The grand marshal was Janet E. Stewart, P.h.D., professor of education. Honored alumni from the 50th anniversary class of 1964 were recognized.