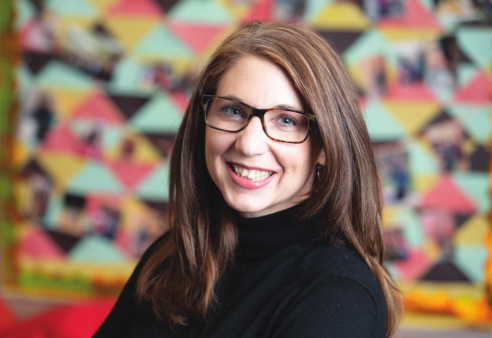 Before we start our interview, Professor Tina Sidener wants me to know something. She apologizes with a smile as she explains that we may be interrupted occasionally during our time together. This is because the children attending the Caldwell University Center for Autism and Applied Behavior Analysis will often stop by her office to say hi or to celebrate a hard-earned accomplishment from their visit to the center. The offices for professors are not meant to separate faculty from university students and the children at the center.
In fact, they are the complete opposite.

Sidener, the chair of the Department of Applied Behavior Analysis, works hard to create an atmosphere that encourages interaction and care for everyone. She is passionate about creating a balance between the work to be done and the kindness that should accompany it. The ideas of integrity, excellence and compassion come up again and again during our discussion. After all, those are the qualities that attracted Sidener to Caldwell University in the first place.

In 2006, Sidener had just completed a predoctoral internship at Kennedy Krieger Institute, a part of Johns Hopkins University, when she saw an advertisement for a position with the Caldwell University applied behavior analysis team.

“I had been thinking I wanted to be a professor, but I knew I was going to be really picky about where,” Sidener says. “I wanted to work somewhere where people were genuinely interested in helping students learn how to be excellent teachers and behavior analysts. I knew that was going to have to be a really special place.”

Sidener credits Professors Sharon Reeve and Ken Reeve with creating an atmosphere that she was excited to enter. As she met them and worked her way through the interview process, she became more and more certain that she wanted to be a part of what they were doing. At the time, she was joining a department, not a full-fledged center, but the passion of the staff was the same.

“These are people who have a good heart,” Sidener says. “They’re committed to science and they’re committed to excellence in what they do, but they’re also committed to things like teaching our students to be compassionate: to have relationships with the families they work with and to have integrity.”

In fact, the more Sidener looked around, the more she saw that this was an overarching theme at Caldwell. She realized that integrity and an attitude of service were woven into the fabric of the school. She joined the team and now spends her time in the ABA department ensuring that those core values are carried forward. Her influence is evident the minute you speak with one of her students.

“Professor Sidener is a kind and positive person,” says Dr. Heather Pane, a recent doctoral program alum. Those qualities “helped me navigate the challenges of being a doctoral student,” she says.

This approach has been a great success. Caldwell University students have found careers as professors while others work in hospitals. Some have started their own businesses, and others work in public and private schools or nonprofits with children with autism spectrum disorder.

“I hear that people are looking for Caldwell students,” Sidener says with a proud smile. “You’re from Caldwell? You’re hired.”

Creating an atmosphere that fostered compassion as well as that kind of success for graduate students was at the forefront of Sidener and Professor Sharon Reeve’s minds when they set out to create the center in 2010. The two visited well-known autism centers around the country. They asked themselves what they wanted the Caldwell center to be like and carefully designed it to ensure they could provide high-quality research at the same time they offered excellent clinical services.

Today, those goals have been realized. Ten years after the center opened, Sidener is in her second year of chairing the department. The center is such a collaborative effort that it is almost impossible to get Sidener to highlight her achievements within it. But the evidence of her passion is visible everywhere.

“What I enjoy the most about being the chair is trying to be creative and innovative and looking at how we can meet the needs of our prospective students as those needs are changing over time,” Sidener says.

Need is a huge theme in the applied behavior analysis field. The need for people equipped with ABA certification, especially in New Jersey, is staggering. One in 59 children in the United States has autism spectrum disorder, and in New Jersey that number is one in 34. Because of this, the demand for behavior analysts increased by 800% from 2010 to 2017. To be working in a field where the need has skyrocketed in such a way presents unique challenges as well as opportunities.

“This is really unusual for a field to grow this quickly,” Sidener says. That explosive growth has come with changes in technology and with financial concerns for students. There is a constant effort to ensure the center is providing a high standard of training while making education affordable for students. That calls for flexibility and a vision for the future.

The challenge of innovation excites Sidener. She is waiting for confirmation that the master’s program has received reaccreditation. At the same time, members of the team are seeking first-time accreditation for the Ph.D. program. They are also working to establish a diversity and equity committee in the department. Increasing diversity in the department and in the field overall is a huge goal.

The department is planning to offer a certificate in business administration. This additional offering will provide valuable tools to applied behavior analyst graduates who want to run their own businesses.

Other goals include offering a minor in ABA. Students would take five classes plus four credits of practicum, qualifying to become assistant applied behavior analysts.

Encouraging progress is a big part of Sidener’s role. But that’s not all she is thinking about. All of the professors in the department, including Drs. Ruth DeBar, Meghan Deshais, Ken Reeve, Sharon Reeve and Jason Vladescu, have areas of research in which they specialize. Two of Sidener’s focuses are teaching kids with autism spectrum disorder to speak and to learn new skills through self-motivation. These personal goals spill over into the work of the center as children and students benefit from discoveries in real time.

“We’re all working individually, and yet we all have a common goal,” Sidener says.

Her drive and her goal-oriented attitude have had a clear effect on her students.

“Professor Sidener is a true professional,” Pane says. “She is an excellent model for all the students in the ABA department. She challenges her students to think critically and to solve problems while providing guidance.”

The victories in the center are tangible, and Sidener doesn’t have to think long to come up with a recent favorite. She recounts how one of the children at the center had a severe problem behavior. Her parents wanted to throw her a big birthday party. Two graduate students set to work to prepare her for the big event and even attended the party. The night was a huge success. The child was happy and dancing, and her parents were thrilled.

“That’s why we do what we do—to make those kinds of changes and make those things happen, to support the families that we work with. That’s the huge reward for us,” Sidener says.

Back when Sidener was traveling with Professor Sharon Reeve to autism centers and dreaming up their own version for Caldwell, they had a simple question: “What do we want this to be?”

The answer was clear.

I walk by a child exchanging a secret handshake with a graduate student. They’re both beaming. On my tour of the facility, Sidener stops to ask one of the kids how his time at the center went today. She waits patiently while he navigates the intricacies of communicating the day’s success. Everywhere I turn, I see smiles and hear cheerful conversation. Excellence lives in these walls, and professors and students are working hard and innovatively. It is clear that Sidener’s earliest goals have been achieved. This is a place of compassion. Just as she envisioned, it is a place where everybody wants to be.