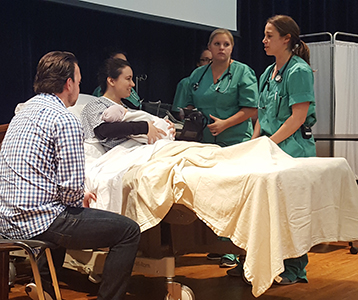 Caldwell, N.J., May 7, 2018 – Students at Caldwell University had the opportunity to witness a simulated event aimed at preventing maternal death. In introducing the event to the students, Dr. Brenda Petersen, associate dean of the School of Nursing and Public Health, cited statistics from the Centers for Disease Control showing preventable patient death is the third-leading cause of death in the United States. She said the United States has the worst rate of maternal deaths in the developed world, and 60 percent of these deaths are preventable.

Caldwell University students reenacted an event involving Lauren Bloomstein, a neonatal intensive care nurse who died in 2011 after giving birth at a New Jersey hospital. Bloomstein was married to Dr. Larry Bloomstein, an orthopedic surgeon. She died at the hospital where she had spent most of her career and where she and her husband had met some years before.

Larry Bloomstein was in the audience watching the simulation at the university and then presented to the students in detail what happened to Lauren after she gave birth to their beautiful daughter. “It means a lot that you are interested in Lauren’s death and want to learn,” said Bloomstein. “This type of exercise was a testament to Lauren and very meaningful for future medical professionals,” said Bloomstein. “She would want to have an impact on the way medicine and nursing are practiced.” He encouraged the students to do good in their chosen fields. “I hope you find satisfaction in your job, like she did.”

The audience included nursing, public health, business and psychology students. Many said they were frustrated at hearing Lauren’s story—especially “knowing how preventable it was,” said Kelly Donaldson, a nursing student. “It really drove home the point as an educational simulation.”

Steven Han, a senior recently accepted into medical school, said the exercise gave him a better picture of the environment that may develop in a hospital and of the events that may take place. “This experience helped me to understand the role and potential responsibilities that come from each of the medical professionals that are involved in the patient’s plan of care. The types of mistakes and the overlooking of critical data portrayed in the simulation are events that I will definitely hope to avoid as a practicing physician.”

“It was amazing,” said Hanifah James, a senior nursing student. “It definitely should be discussed in Caldwell and other nursing schools. It’s very sad to see that it could have been prevented. I’m so glad I got to witness this.”

Gabriella Caparino, also a senior nursing student, said the simulation built on what students do in the labs at Caldwell, including mock codes or mock rapid response simulations. The scenario was shocking to her since in her clinicals she had seen hypertensive distress. “My nurses know what to do.”

Led by Petersen and nursing faculty member Dr. Aneesha Jean, after the simulation of Lauren’s death, the students who attended were assigned to conduct a “root cause analysis” and to “ask why” five times. Petersen explained that this systematic analysis allows organizations to look at the root causes when errors occur in high-stakes industries such as health care. “Too often within the health care industry, when errors occur, people die.”  The “five whys” technique is used in the analysis phase of Six Sigma to “peel away the layers that lead to the root cause of a problem,” she said. Six Sigma uses data and analysis to look for errors to improve outcomes within organizations.

Petersen said the inter-professional health education collaboration simulation exercise provided students with the opportunity to work in teams to look at a problem and consider solutions. “Learning that takes place in a simulated environment allows learners to make mistakes without patient harm and also allows the health care system the opportunity to reenact events that have a poor outcome to look at the factors that contributed to this.”