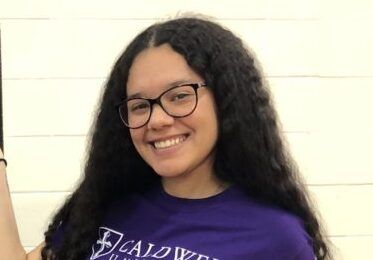 The Dominican Magnificat and Dominican Blessing are songs the chorale sings at Masses and special functions. The pieces express the faith and Catholic Dominican history that are at the core of Caldwell University and its founders, the Sisters of St. Dominic of Caldwell. Often the students who sing those scores do not know the rich heritage behind the music, explained Dr. Laura Greenwald, director of the chorale and music professor, who has been at the university for over 30 years. “I have worked with so many of these brilliant women, and I know their dedication to education and the order’s charism. But now there are only a few sisters working in person at the university, even though many live nearby. I wanted the students to meet and connect personally with at least one Dominican Sister to add to their understanding of the music we are singing.”

Greenwald knew she had to start the fall semester differently due to the pandemic.  Along with rehearsing both inside and outside, wearing masks, and practicing social distancing, she wanted the students to feel connected to others at a time when many people feel isolated.

She assigned the students the task of interviewing a Sister of St. Dominic of Caldwell via Zoom or the phone about her involvement in education and her feelings about the Dominican Magnificat and the Blessing.

Mann listened to Sister Mary John describe her vocation as a Dominican Sister and her devotion to Mary, the patroness of the Dominican Order. She spoke of her family’s devotion to Mary, which was fostered by her parents, and her schooling from kindergarten through high school, which was nurtured by the Dominican Sisters of Caldwell. Mann said Sister felt a strong connection to God in those two songs. Of the Magnificat, Mann quoted Sister as saying,  “… I was so touched by its musical composition, and it so moved me spiritually, aesthetically, and joyfully. I found myself graced with not only the words but [also] the meaning it brought out in me.” Mann was excited to learn that Sister Mary John was a soprano “like myself” and that she believes in the old adage “She who sings once, prays twice.”

Noreen Abedrabbo ’24 interviewed Sister Joanne Beirne, O.P.,  who works in the Academic Success Center at the university. The conversation with Sister Joanne, a former nurse, was “a very fun project” and led Abedrabbo to understand the songs more and “sing them with more emotion.” Abedrabbo recounted some of the memorable moments for Sister with the music including when she and other Sisters sang the Dominican Blessing at the summer drive-by outside the health care facility, St. Catherine’s. The Sisters were thanking the essential workers for their courage and commitment during the pandemic. Sister holds in her heart the memories of when the Magnificat was sung at her 50th-anniversary jubilee celebration and at a university baccalaureate Mass. “I went to public school and did not sing these kinds of pieces,” said Abedrabbo, but after her conversation with Sister Joanne, she knows the songs are beautiful messages of hope that can help her lift her voice. “I can use that when I sing to make them stronger.”

Katherine Arena ’22, a psychology major,  had the pleasure of interviewing Sister Joan Doyle, O.P., a former educator, principal, and prioress of the Sisters of St. Dominic.  She was moved to hear Sister Joan share her vocation story—how she stepped out in faith at 18 years old to pursue her vocation and has cherished every minute of her life as a sister.

The Dominican Magnificat always brings Sister to “a place of joy,” said Arena. “She said it is a song of praise but also of resilience.” Arena learned that “it was Mary’s first prayer and that it shows God’s great value for women.”

She was moved by Sister Joan’s “humble, joyful heart” and how she believes strongly that one can continue to serve in every stage of life. Arena thinks it is a great piece of advice—that no matter your background or age, “you can always help someone.”

Prior to the assignment, whenever Arena would sing the Dominican Magnificat she could see the emotion of those in the congregation but never knew why. Now she understands. “It is not just a song.”

Several other students interviewed other Sisters who shared their experiences with the richness of the Dominican songs.

More about the Magnificat: The Magnificat refers to the Canticle of the Blessed Virgin Mary, which starts with the line “Magnificat anima mea Dominum,” meaning “My soul does magnify the Lord.” Mary, the Mother of God, first spoke the phrase when she went to visit her cousin Elizabeth after the Angel Gabriel had appeared to Mary and told her that she would conceive and bear a son, Jesus and that He would be great and called the Son of the Most High. The Magnificat comes from Luke 1:46-56.

The Dominican Magnificat was inspired by the biblical “Magnificat”.  It was composed by Feargal King in 1990 for the 150th-anniversary celebration of a Catholic Church in Ireland. King had attended a summer camp run by a Dominican priest to teach young people church music. The verses highlight the Dominican values “to bless, to praise, and to preach.”

The German pastor and theologian Dietrich Bonhoeffer, killed by the Nazis for his resistance, wrote of the Magnificat, “This song of Mary is the oldest Advent hymn. It is the most passionate, most vehement, one might almost say, most revolutionary Advent hymn ever sung. It is not the gentle, sweet, dreamy Mary that we so often see portrayed in pictures, but the passionate, powerful, proud, enthusiastic Mary, who speaks here.”