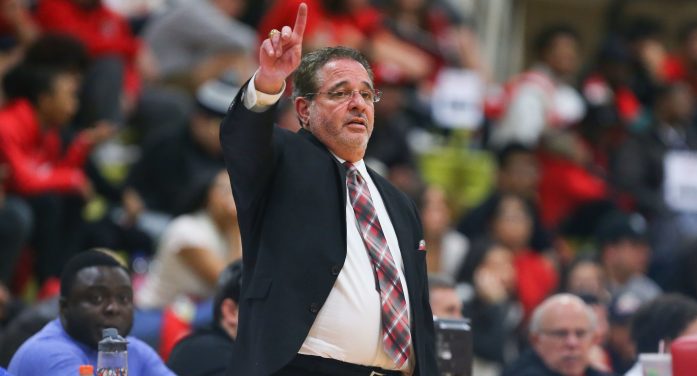 CALDWELL, N.J.- Caldwell University Men’s Basketball Head Coach Mark A. Corino has announced his retirement as the head coach of the men’s basketball program after 34 years at Caldwell and 39 years of coaching. Corino will continue in his role as the Assistant Vice President/Director of Athletics for the department that he has led since 1988. This transition will occur at the end of September of this year.

“I will have a very difficult time trying to fully express my gratitude to all who have supported me over the past 30-plus years, in my coaching career,” Corino said. “I could not have gotten through it all without the love and support of my family, friends, our Caldwell University men’s basketball players, the continuous support of the Caldwell University community and my assistant coaches (past and present), especially my longtime assistant coach Dean Johnson, who has been by my side for over 30 years.”

Corino’s coaching career spans nearly 40 years, which includes 34 seasons leading the Cougars. He has built one of the most successful men’s basketball programs in the state of New Jersey during his time at Caldwell, where he has amassed over 500 career victories with the Cougars. Corino previously coached for five seasons at Bloomfield College and has a 606-494 career record between the two institutions.

Caldwell President Matthew Whelan, Ed.D. said, “Today, with the retirement of Mark Corino, we have lost a legend on the basketball court. However, Mark Corino, New Jersey’s winningest men’s basketball coach, is, and will forever be, woven into the fabric of Caldwell. I look forward to the next chapter with him as together, we weave a future of new opportunities with Mark as Athletic Director steering our student athletes and programs to new heights.”

On the court, Corino has been one of the most successful college coaches in the state of New Jersey. Corino passed legendary Princeton University Head Coach Pete Carril with his 515th victory in a 103-68 win against Dominican College on January 10, 2015 and passed the previous all-time leader in wins, former Stockton University Head Coach Gerry Matthews (603 career wins) on January 8, 2022. He is one of only three head coaches in New Jersey with over 500 career victories.

Corino commented, “I must say thank you to the Dominican Sisters and the administration that brought me here to Caldwell in August 1988. That includes former Dean for Students Kathy Detlet, former Vice President for Student Life Sister Michel Rodgers, O.P. and former President Sister Vivien Jennings, O.P. I must also say thank you to our former presidents Sister Patrice Werner O.P. and Dr. Nancy Blattner and our current president Dr. Matthew Whelan for their continued support to the men’s basketball program and for all the encouragement and inspirations throughout our time together.”

Corino marked another historic milestone on January 27, 2018 as he coached in his 1,000th game in a 47-40 win over the University of the Sciences. He is among the all-time victory leaders in Division II, ranking in the top-25 all-time in career wins and is among a group of 100 coaches across all three divisions with over 600 victories.

He guided the Cougars to two NCAA Division II Tournament appearances and led Caldwell to a victory in the opening round in 2021. In addition to his two NCAA Tournament trips, Corino’s coaching accomplishments are impressive: Five trips to the NAIA national tournament; seven CACC regular-season championships; six CACC Tournament titles and an NAIA District 31 crown.

Corino said, “I have always thought of myself as an educator and coach and, at its core, coaching isn’t about winning and losing. At the college level, coaching is about teaching, molding and developing teenagers into young men and having them become positive, productive members of society. I have worked extremely hard at that every day of my coaching career with that philosophy in mind.”

Corino’s contributions to the Caldwell community culminated with the naming of the basketball court after the longtime head coach in 2018. Mark A. Corino Court was officially dedicated on December 8, 2018 in a ceremony that featured speeches from then-Caldwell President Dr. Nancy Blattner and Central Atlantic Collegiate Conference Commissioner Dan Mara, as well as special proclamations from then-Caldwell Mayor Ann Dassing and West Caldwell Mayor Joe Tempesta, Jr.

Corino added, “The experiences that I have had leading this program for 34 seasons have truly been an honor and I will always hold a special place in my heart for those who have coached with me and those who have played for me and allowed me to coach them.”

Corino himself has received several honors, including four CACC Coach of the Year awards. In 1992, Corino was named the Jersey 9 and District 31 Coach of the Year. He was selected by the Metropolitan Basketball Writers Association as its Coach of the Year in 1998. In 2016, Corino was inducted into the Caldwell Athletics Hall of Fame for his extensive contributions as the athletics director and head coach. In 2018 he received the prestigious Garden State Award from the Collegiate Athletic Administrators of New Jersey. This spring, Corino was inducted into the Basketball Reunion Hall of Honor and received the Distinguished Service Award from the Metropolitan Basketball Writers.

In his career, Corino has emphasized academics with his teams and it has paid off with multiple student-athletes honored on the CACC All-Academic Team. His program has seen 18 student-athletes recognized on the National Association of Basketball Coaches (NABC) Honors Court. His teams have been awarded the NABC Team Academic Excellence Award eight times over the last 10 years that the program has existed.

Corino concluded, “I read once that tears are a gift from God and that tears show that your heart can be touched. I think everyone knows how my heart has been touched by Caldwell University basketball. As we look forward to the challenges ahead, as Assistant Vice President/Director of Athletics, I will direct all of my energies to meet all of those challenges to improve and provide a continued positive experience for all of our student-athletes at our university.”

An announcement on the next head coach will be released soon.