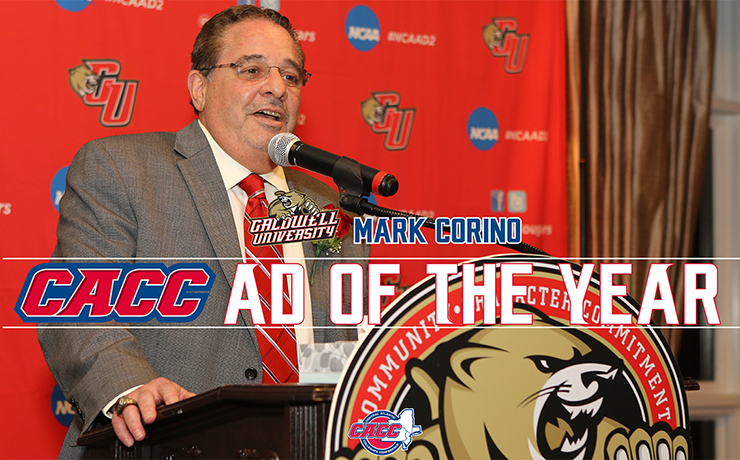 Caldwell University Assistant Vice President/Director of Athletics Mark A. Corino was recently voted by his peers as the 2020-21 Central Atlantic Collegiate Conference (CACC) AD of the Year. The announcement of the honor was made by CACC Commissioner Dan Mara. The voting was conducted by the league’s 14 athletic directors, who honored Corino for his hard work in helping to lead the conference during the pandemic with his fellow administrators. This is Corino’s third CACC AD of the Year honor as he was previously recognized in 1999-2000 and 2016-17.

Corino, who serves as the Chair of the CACC Directors Council, has guided dozens of virtual meetings with conference athletic directors over the past 12 months. He has helped the league craft guidance and rules for how it will conduct intercollegiate athletic competition in a safe and responsible manner during the 2020-21 season.

“It is truly an honor to be recognized by my peers in the conference as the CACC AD of the Year,” said Corino. “I am fortunate to work with a great group of athletic directors and conference staff. It has been a challenging year but rewarding to work with my peers for the betterment of our student-athletes. I am thankful for our university president, Dr. Matthew Whelan, the board of trustees and the cabinet for the opportunity to have our student-athletes compete during this difficult year.”

In addition to his myriad of duties as the Chair, Corino serves on the prestigious NCAA Division II Management Council, which helps chart the course of the national organization at the DII level. In his role on the council, Corino has taken part in dozens of virtual meetings to help guarantee student-athletes have the opportunity to compete this season in a safe way while navigating through the pandemic.

When he hasn’t been taking part in virtual meetings for the league, NCAA and the university,  Corino has also served as the school’s men’s basketball head coach. Under his guidance this winter, Caldwell went 6-5 and advanced to the NCAA Division II East Region Tournament for the second time in program history.

Corino was also recognized by the New Jersey Media as the 11th-ranked college head coach in the state. This season, he reached the 500-win plateau in his 30 plus years at Caldwell and 598 overall wins as a collegiate head coach. Corino ranks second in the state in coaching wins by a college men’s head coach and is one of three men’s head coaches to reach 500 career victories.

Corino himself has received several honors, including four CACC Coach of the Year awards. In 1992, Corino was named the Jersey 9 and District 31 Coach of the Year. He was selected by the All-Metropolitan Basketball Writers Association as its Coach of the Year in 1998. In 2016, Corino was inducted into the Caldwell Athletics Hall of Fame for his extensive contributions as the athletics director and head coach and he received the prestigious Garden State Award from the Collegiate Athletic Administrators of New Jersey in 2018. Corino is a former member of the NCAA Men’s Basketball Rules Committee for all divisions and served on the DII East Region’s Regional Advisory Committee for men’s basketball.

Caldwell is also among the league leaders in academic achievement. During the 2019-20 academic year, 13 Caldwell teams that compete in the CACC posted team-wide grade point averages of 3.0 or better. In November, the NCAA announced its latest Academic Success Rate scores, and Caldwell ranked among the top third in NCAA Division II with a 90 percent average.