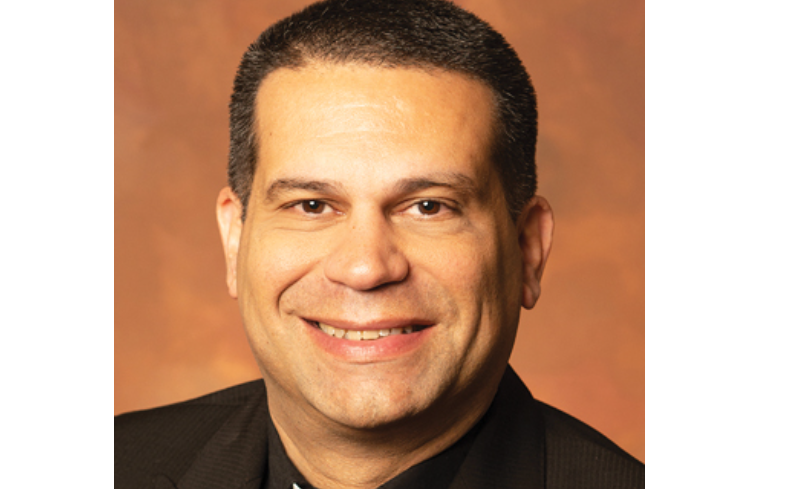 Father Dominic Ciriaco ’93 credits the Sisters of St. Dominic of Caldwell for his vocation to the priesthood. Growing up in Caldwell he attended St. Aloysius grammar school where the Sisters served. “They were very inspirational to me for my vocation when I was a child— living together, the work they did,” says Father Dominic, who is the rector of the Theological College, the National Seminary of the Catholic University of America in Washington, D.C., which serves seminarians preparing to serve as diocesan priests. “I always said the Sisters would favor me because of my name. My father’s name is Dominic. I always had a great love for St. Dominic and again the Dominican way.”

The Theological College sits at the crossroads of a Catholic hub in the U.S. where people from around the country and the world come to visit the Basilica of the National Shrine of the Immaculate Conception, Catholic University of America, the United States Conference of Catholic Bishops and the Dominican House of Studies. Father Dominic’s seminary serves 22 dioceses across the United States. “That is what is exciting. I see the Church of the United States come together here,” he says.

“I think the culture of all those areas is interesting to see—the dynamics they bring and what they are going back to,” says Father Dominic of the varied situations the newly ordained men will face across the U.S., with some assigned to megachurches and others running churches without any other priests.

The seminary was started by the Sulpicians, a society whose founder was Father Jean-Jacquest Olier. In 17th-century Paris, future priests were trained in an apprenticeship format, and Olier saw a need for training in community. “That is our charism. The specific work is to do seminary formation,” explains Father Dominic. It is gratifying work and daunting given the challenges in the Church today. “You really get to see the thinking of these men as they are preparing for the priesthood, growing in holiness … and learning from the struggles of the past with the Church, applying (them) and helping us to try to do better in the future.”

Father Dominic remembers his days of discernment when he was an undergraduate at what was then Caldwell College. After attending high school at James Caldwell, he decided on Caldwell because he wanted to be in a Catholic atmosphere and because his older brother had been pleased with his education at the college. Dominic majored in social studies and education with plans to become a teacher. “I loved the education classes.” He remembers fondly his education professors Sister Mary John Kearney, O.P. and Sister Mary Amelia Cetera, O.P. He also enjoyed English and history classes. “Sister Brigid Brady had an Age of Chaucer course, which I just loved … Dr. Marie Mullaney was one of my favorite teachers.” Sister Mary John says Father Dominic was an outstanding young man as a student “who was wonderful in taking on any kind of leadership role,” particularly as president of the Caldwell College Education Association.

During his undergraduate years Dominic worked on the yearbook, was social chair of the Student Government Association and a member of the Honor Society for education and for a period wrote for the Kettle student newspaper and was active in campus ministry. During his senior year he started seriously discerning a vocation; he had heard the call earlier but put it off. He got to know some newly ordained priests and had conversations with Caldwell’s long-time chaplain, Father Bob Stagg.

Upon graduation, Dominic decided to teach fourth grade at Sacred Heart School in Lyndhurst. After one year he entered Immaculate Conception Seminary at Seton Hall University where he earned his master’s degrees in systematic theology and divinity and was ordained in the Archdiocese of Newark, becoming the first Caldwell College graduate to become a priest. He recalls how Sister Patrice Werner, O.P., then Caldwell’s president, sent him a congratulatory card and commented that Mother Joseph Dunn—who founded the college in 1939 for women— probably never envisioned that an alum would become a priest. Sister Mary John said it was a “joy for all of us” to watch Dominic go through the seminary and then receive his first blessing at the Cathedral Basilica in Newark.

After his ordination, Father Dominic spent eight years in Catholic high schools in New Jersey, teaching theology and working in campus ministry, and then served for 12 years in parishes—St. Agnes in Clark, Notre Dame in North Caldwell and St. Mary’s in Dumont where he was the pastor for four years. “That was where I was inspired to want to do the work of seminary formation.”

He joined the Theological Seminary, serving as the associate director of intellectual formation and director of Basselin scholars, and then became vice rector and dean of men. He also taught the preaching practicum at Catholic University.

The Dominican influence is still a part of his life; he is working on his thesis for his doctorate in preaching through Aquinas Institute of Theology in St. Louis, a program he says is ideal for those who work full time in ministry and want to go to school. His research on “Preaching with Art” focuses on the work of pop artist and former nun Corita Kent, a peace and justice activist who was drawn to the work of artist Andy Warhol. Kent’s former spiritual director was a Sulpician, and the community owns a good portion of her work, which Father first saw at its provincial house in Baltimore. He is convinced of the great power of art to “preach on its own” and believes preachers can use an art piece to enhance homilies and visualize a Gospel passage.

Father Dominic has authored two books. The first was “‘Witnesses to the Gospel: Reflections on Saints and Others Who Inspire,’ which came out of my time teaching high school.” He wanted to make the Gospels come alive through the lives of the saints, so he showed how saints lived out Scripture quotes. The second was “A Woman for All Seasons: Margaret Anna Cusack, The Nun of Kenmare,” focusing on the foundress of the Sisters of St. Joseph of Peace.

Although his work these days is primarily with seminarians, Father Dominic says Vatican II called all Catholics to serve the Church. The faithful can and must play a role in promoting the priesthood, especially if they want to see the sacraments continue, he says. “We might see something in someone where they would be ideal with this … encouraging it and not shying away from it … just to plant the seed and get the person thinking.” And it is the same with encouraging women to consider religious life and all Catholics to be a part of their Church communities. “I’m a proponent for vocations in all those areas.”

Father knows that Caldwell University students and alumni are privileged to be a part of the University’s rich tradition. He points to the Dominican motto “to praise, to bless, to preach” at the core of the Dominican charism as important for everyone in the campus and alumni community to take to heart. “To praise is to always stay connected to God and give glory to God, and the Dominicans do that well. To bless is to touch people’s lives in different ways” including through the social justice work the Dominicans have done and continue to do today. And to preach means “to communicate the Word of God not just through words but also through our actions.”

The Dominican order, he says, has had a major impact on the Church and continues to have a great influence. “I hope students leave there knowing some of the Dominican impact, the Dominican saints.” The gift of this legacy is theirs to discover. “That is up to them. They have to catch on to it.”