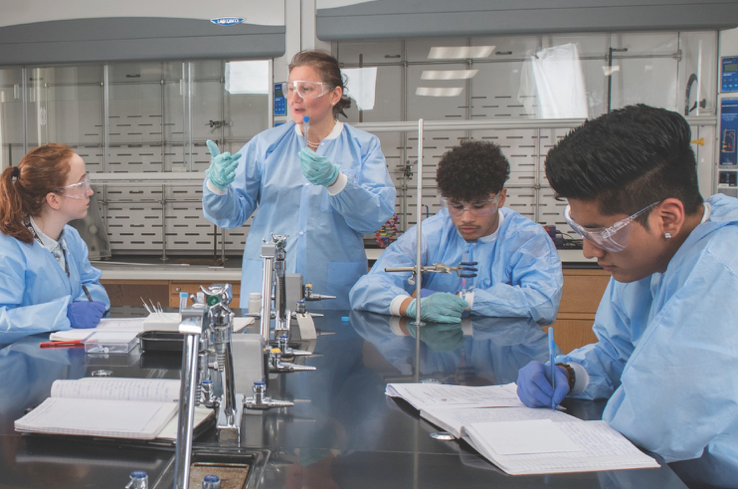 Enjoying a roller coaster ride at Six Flags with your professor might not be what students are expecting when they decide to study science with Dr. Agnes Berki, yet that is exactly the kind of unexpected adventure that awaits them. “We tried many rides and screamed together on many of them. We all had a great time!” recalled Berki, as if a day of laughter at a theme park is routine for biology students. Yet for Berki, who regularly treats her students to excursions like field trips or dinner, all the screams and laughter are for a serious purpose. “These outside activities are important. Those experiences transform the class into a team, and later, into a true research team.”

For Berki, an associate professor of biology in the Natural and Physical Sciences Department, inspiring her students to take on new challenges together is critical to success. At first glance, these extracurricular activities may not seem necessary, but Berki emphasizes the important role they play in forging a bond among her students and transforming them from simply classmates into a team. “This transition happens every year, sometimes quicker, and sometimes it takes a longer time, but it happens eventually, and that is the point when students become one team. They feel freer to help each other, to ask advice, to give or accept constructive criticism.” It is important, she says, for students to realize that research is a team effort –“that in a team we all work for the same goal, and we all matter; all of our opinions are valued. The fun activities make the class more enjoyable, and they also help to build friendships.”

Facing challenges, embracing change and keeping an upbeat outlook have been themes throughout much of Berki’s life. Born in Hungary, she grew up with Russian troops everywhere. The atmosphere was oppressive. “You couldn’t say anything. There was no freedom of speech.” This lack of freedom was driven home when her father, who had been a successful lawyer, refused to sign an execution order for political prisoners. “They said okay, you will not wind up in Siberia but you cannot practice. So he changed his career and went into business.” Berki’s curiosity drove her to question her father about the political situation, but he would respond, “I can’t tell you because even the walls have ears.”

Despite the presence of troops, Berki recalls her childhood fondly, noting that her father, “one of the greatest influences of my life,” bought her a piano and taught her how to take care of herself by learning useful skills like fixing her bike. He encouraged her to have confidence in her intelligence and her ability to learn. The only time she brought home a bad grade, Berki came to her father crying. “He said to me, ‘You can stop crying. I’m not going to punish you. You see all the marks you ever get in life, you get for yourself. You’re not getting it for me. So if you get a good mark, it’s to your credit. And if you get a bad mark, it’s your fault. It doesn’t matter for me whether you get good or bad marks. I will still love you. You study for yourself.’ From that time on, I was never afraid.”

Berki’s father found great success in business, the career forced upon him. The family moved frequently, and Berki attended two kindergartens before changing schools several times more. Just before the eighth grade, the family moved again, this time a half-hour from her previous school, but when it came time to start a new one, Berki put her foot down. “I told my dad, ‘Okay, I am not going to a new school for the eighth grade,’ so I traveled on the bus every day so I didn’t have to go to a new school.”

Moving frequently as a child helped Berki when it came time for her to move to the United States. “We moved so many times that it prepped me for a big move over the ocean.” She was just 26 years old and six months away from finishing a Ph.D. program in neuroscience when she relocated to the U.S. The move was difficult since she did not speak English. She had to restart all her studies. Without the support of her family and friends, it would have been a struggle to adjust to her new country.

“Coming here was a big shock for many different reasons. The windows open differently; the faucets work differently—I burned myself many times. For the first three months, I wrote a letter to my mom every day.” It took Berki a year to learn English, helped along by watching the movie “Mrs. Doubtfire” daily. America was completely different from her homeland. “We grew up in an environment where you always have to watch out. And then you come here, and compared to there, it is a vacuum. You can say anything. You can think anything. It’s a big shock culturally and politically.”

She began working as a special volunteer in the neuroscience lab at the National Institutes of Health. “I worked there for three months, and I was lucky because in the lab where I worked there was a Hungarian lady, so she taught me.” Berki learned polymerase chain reaction, or PCR, a method used for the Human Genome Project. “I had a great relationship with them. I got recommendation letters from them.” After leaving the NIH, she got a job at the University of Maryland at Baltimore School of Pharmacy as a lab technician, preparing the lab for experiments. She continued studying English and took the GRE.

“After two years, I started to realize the beauty of the United States and the beauty of freedom and free speech.” While only six months away from finishing her Ph.D. back in Hungary, Berki began the incredible challenge of starting over again at the Maryland school of pharmacy. Majoring in molecular biology with a minor in pharmaceutical sciences, Berki finished her Ph.D. The initial setback of starting over “made me a stronger person. I don’t shy away from challenges.” When anyone doubts her ability to achieve a goal, she becomes even more determined. She recalled how someone once told her she would never receive a hefty—and very competitive—nationwide scholarship, so she set out to prove the person wrong and wound up being awarded a significant portion of the scholarship. “I only applied because someone said I could never get it.”

In 2006, Berki became a senior scientist at Schering-Plough Research Institute where she oversaw research, development and improvements of assay methodologies. In 2010, she became senior scientist and virologist at Gibraltar Laboratories, Inc., handling composition and submission of laboratory reports to clients. Also in 2010, Berki came to Caldwell and immediately began to make her mark. “I am fortunate to teach at Caldwell University. The same ideology of developing well-rounded individuals in a nurturing and supporting environment, which was the inspiration of the founding Sisters of St. Dominic almost a century ago, is still the heart and soul of our institution today.” After crossing an ocean to start anew, Berki says, “I think I am where I am supposed to be.”

In only a short time, Berki has become a guiding force in the university’s goal to expand its research efforts, starting with inspiring her students to embrace Caldwell’s challenges and benefits.

Berki does independent research with students, helping them to select the best focus from a list of 10 potential topics and then guiding them through the process of writing a proposal for money. “Our greatest supporter is the Independent College Fund of New Jersey. It’s a wonderful thing because it’s a students’ idea and it’s funded by an outside source to be completed. It looks awesome on their résumés.” Known for staying late on campus—sometimes until midnight—to work with her students on their research, Berki has inspired many to strive for the highest standards. As recent biology graduate Eva Suchar says, “When I presented my research, it really felt like working with Dr. Berki was prize enough.”

Berki guides the students through conducting research and then creating the posters for their presentations, which requires working all the way through Saturday and Sunday. They then spend the week before their conference practicing presentations. “That’s another long day because they take turns so one will give a presentation, and then we give pointers and feedback and they practice again. We do it as many times until we say, ‘Okay, that is good.’” Berki motivates her students to embrace the hard work and challenges, to seek knowledge to better themselves, much in the same way her father taught her so many years ago, when she tearfully brought home a bad grade, to be unafraid to fail.

She has been chair of the university’s Research Task Force, which held the first Caldwell Research and Creative Arts Day this past April. Berki hopes the annual research day will increase visibility inside and outside the university and highlight all the outstanding research being conducted at Caldwell. She is always emphasizing to her students how important it is to become engaged in research, as they will learn teamwork, interpersonal skills, troubleshooting and analysis, which graduate schools and prospective employers highly value.

Berki has very high hopes for her students. “We have more and more students who are interested in pursuing a Ph.D. in different fields of science. My very first honors student is focused on going into a Ph.D. program. And now I have a freshman who wants to get a Ph.D. in neuroscience.”

But Berki wants her students not only to stand out in their fields, but more important, to be upstanding human beings. “I truly hope they will always remember that paying attention to details, hard work and integrity will always pay off no matter what careers they choose and what they will do in their lives.” Her father chose to start over again rather than be a part of something unjust, and in the process he became a successful businessman and an inspiration to his daughter. Berki too has had to unexpectedly start over again, only to achieve success and joy that she cherishes. It’s no wonder there is so much wisdom in her advice to students. “I hope they will keep in mind that life is not a straight march.”

One day over the summer, Berki came in to her office to work, only to find an envelope from a recent graduate taped to her door. Written on it were the words “Legjobb Tanar”—Hungarian for “the best teacher.” Indeed.  n

Her favorite book is “The Ingenious Nobleman Mister Quixote of La Mancha” by Miguel de Cervantes. Berki is inspired by Don Quixote and his ability to see the good in each person he meets. “He is also able to make people realize their own value and help them embrace it, touching their life for the better.”

She sings with the Caldwell Music Department’s choir. “I love to sing and I sang all my life. I was always a part of church choirs in every church I’ve attended. Sometimes I was a part of two choirs.” While in Baltimore, she attended the historic St. Alphonsus Church and was a member of the regular English choir and the Latin choir.